The new year kicks off with a new book, The Innkeeper’s Bride. 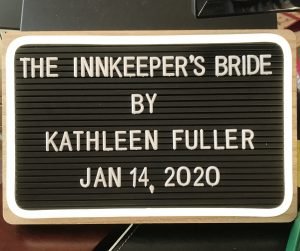 This is the third book in the Amish Brides series, and it’s my favorite. From the back cover:

Levi Stoll moved to Birch Creek with his widowed father, sister, and grandmother to run a much-needed inn in the small town. Within this thriving community Levi has found his purpose and joy in the new inn. It doesn’t hurt that the move also provides him a fresh start, leaving behind some mistakes he’d much rather forget.

Selah Ropp has returned to Birch Creek after trying to outrun her own unhappiness. Genuinely glad to be back with old friends, Selah starts to work at the inn and can’t deny the sparks that fly between her and the handsome innkeeper. He’s like no man she’s ever met.

But Selah has a past, and she knows Levi will reject her if he discovers it. What she doesn’t know is that Levi is overcoming his own past mistakes while trying to ignore his attraction to his employee.

With Kathleen Fuller’s trademark humor and memorable characters, The Innkeeper’s Bride reminds us all that with God’s grace, the past is forgotten and love will reign supreme.

I’ll be doing some fun promotion for The Innkeeper’s Bride, including a Facebook chat, a takeover of the Amish Life page on FB, and a book and crochet giveaway. Make sure you’re following me on social media–the follow icons are on the homepage of my website. The Innkeeper’s Bride is now available for pre-order and will be on bookshelves January 14th.

On a personal note: January 1, 2020 officially marks 20 years of writing for me. 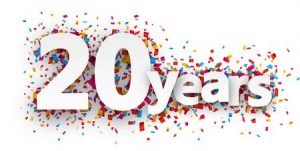 On January 1, 2000, I decided to try to write a book. It’s hard to believe that two decades and nearly sixty books later, I’m still writing and still loving it! Thank you, dear readers, for coming along with me on this journey and for making it possible. I hope to write for at least twenty more!

And the winner is…